Recently I’ve had an interest in trying my hand in embedded device hacking. I decided that I’d pick up something I know to start with. After searching eBay I decided on the popular Linksys WRT54Gv5 router. After personally using this router for years I figured it’d be a nice familiar place to start. 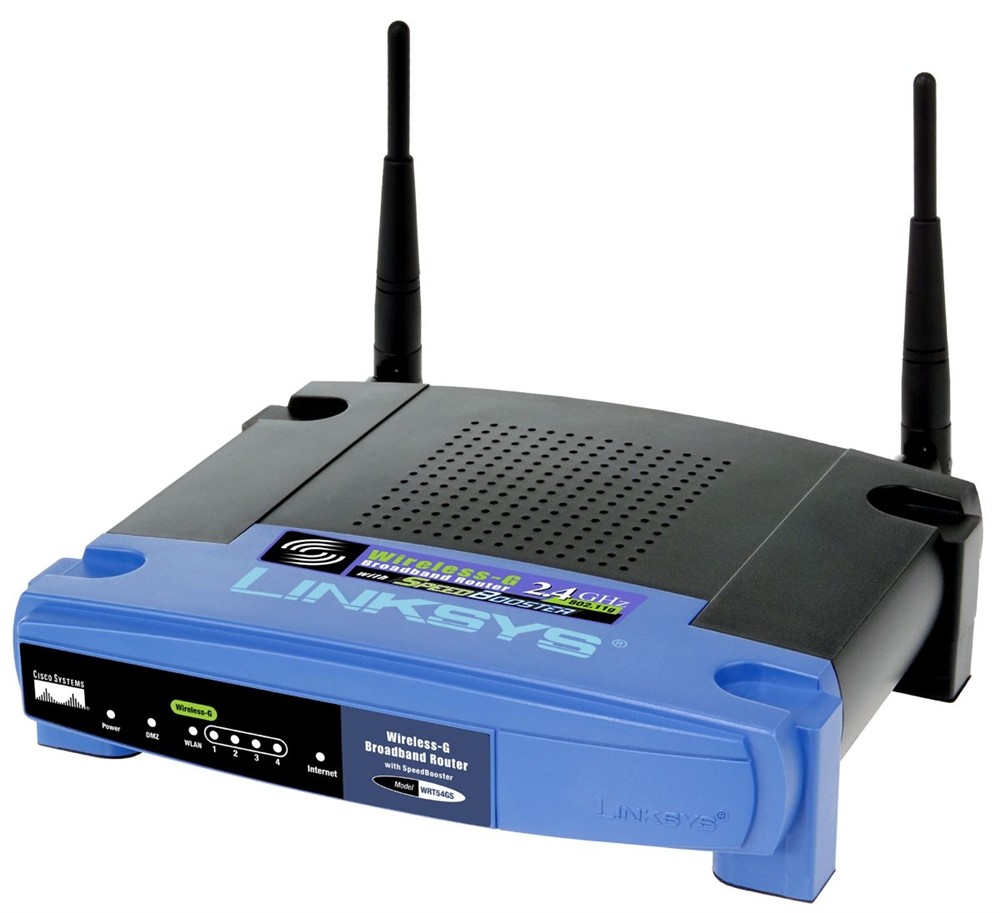 My first goal was to reverse engineer the firmware to get a better idea of what the internals looked like. This turned out to be a pain as apparently Linksys doesn’t host the firmware anymore and due to the firmware being copyright protected nobody else does either. Which is an idiotic thing by itself but eventually I was able to find a stock copy. I flashed my router with it to keep it consistent and began analysis of the firmware.

After reading a bit from the http://www.devttys0.com/ blog I decided to use binwalk to analyze the firmware file.

Here are the results:

So, after seeing this I counted myself pretty lucky, here is a breakdown of this data as I understand it:

What makes us lucky is the fact that the gzipped files are concatenated one after another. This allows us to know where each file ends and starts. The offsets are determined by the magic number signatures for the different filetypes. These are simply a couple bytes that mark what type of file is being used. So for example the bytes for the gzip format are 1f 8b – binwalk finds these and lists where in the binary they are located.

Great, so now we can get to the fun part. Logically, we should be able to slice out files and replace them as long as the size is consistent. This is probably not necessary but it’s a worst case scenario (say, if they actually depend on certain offsets for updates).

A little bit of dd and we can chop one of the .htm files out of the router for modification. Binwalk has a built in extract function but I could not get it to work properly (attempt it yourself to see what I mean).

You’ll notice this bit in the “lastpassword.htm” file:

That tag will be replaced with the current router password, so perhaps we will put it in Unauthorized.htm! That way we will always be able to take control of the router regardless of password changes.

Remember, because we’re being paranoid we will ensure the file is the same size as when we started. It’ll be a little bit of a pain due to compression being used on the .htm files, but it’s not too bad.

After a bit of fiddling we end up with:

After a quick ls we can see the files are exactly the same size:

So we’ll cut before and after the original “Unauthorized.htm” file and then we’ll rebuild with cat.

Great! Of course we should double check all is consistent but upon rebuilding everything we can go ahead and flash the firmware! 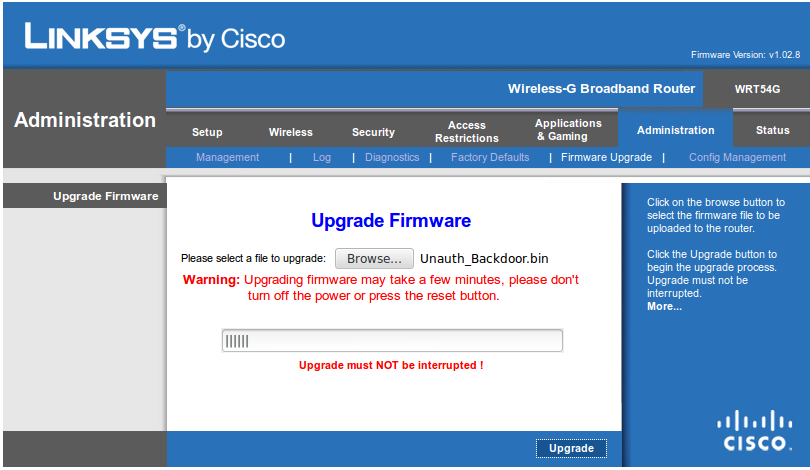 I’ll admit the first time I did this I was pretty nervous it wouldn’t work. However it all works out fine (and why wouldn’t it?).

The firmware has been flashed but did it work?

We simply cancel this dialogue and get the not authorized page:

Perfect! We now have persistent access to the router in a pretty stealthy way. But this isn’t universal or useful on a larger scale, what if we want a payload that works more like a botnet?

In search of a more universal backdoor we will make this one completely Javascript. Javascript is a good option due to the fact that it is not platform dependent (MIPS assembly payload wouldn’t work on a non-MIPS router etc). It also provides us with enough functionality to change all of the built in setting to whatever we please (via XMLHTTPrequests, etc.). While we won’t be able to preform DoS attacks we will be able to do important things like control the router’s DNS server. Control over the router’s DNS is valuable to malware authors who can use this to do network wide adware/malware attacks. This is because most computers will simply use the DNS that the router chooses, so it’s much more efficient to simply hack the router than all of the individual computers. This sort of attack has already been preformed in the wild by malware like the Zlob trojan, which turned out to be very effective.

The homepage of the router is the “basic.htm” file, upon logging in the user is immediately directed there. So if we backdoor that page we will have a good level of persistence. We will make a payload that will send the username and password back to our control server and also enable remote authentication on port 1337.

After a bit of Javascript coding and we have something usable:

In two requests we will both set remote control and send the username and password back to the botnet server.

Using the same method as before we trim off all excess space and useless HTML (lots of commented out code in the production firmware, it’s pretty horrifying). Then we will pack it back into the firmware (remember: we must ensure the files are the same size).

Another flash and wallah! We have our new backdoored firmware!

Granted this is just a proof of concept, the real backdoor would probably contact a C&C for further instructions/fresh set of DNS servers.

Much more simple than you’d think, most router firmware that I’ve analyzed can be modified in this same way.