A Summary On Certificate Authorities & SSL/TLS

For those unfamiliar with the current certificate authority (CA) system used on the web, I’d recommend watching Moxie Marlinspike’s talk on SSL and the Future of Authenticity for an in-depth look. This is also happens to be one of my favorite talks and Moxie is a great speaker, so I highly recommend it (bonus points, he also talks about Comodo specifically). For those who don’t want to watch the talk, I’ll write a short summary here.

This entire system was designed to prevent man in the middle attacks which attempt to snoop on a victim’s traffic. When SSL/TLS is implemented properly, an attacker would have to present a valid certificate which has been signed by one of the trusted intermediate certificate authorities. If an attacker did have access to a valid signed certificate for a site, it would allow him or her to intercept all traffic to that site and the browser would still show the “secure lock” in the URL bar saying everything is fine. Suffice to say, ensuring the online systems which allow people to obtain signed certificates are secure is very important. If ANY of the existing online certificate issuing systems were compromised then the entire system is essentially bypassed.

When I started out hunting for possible vulnerabilities, my initial strategy was to look for the cheapest, most 90’s-looking, poorly designed certificate authority websites. Since the compromise of any certificate authority allows an attacker to bypass all the protections of SSL/TLS it doesn’t even have to be a popular provider because they all have the same power. After doing a bit of searching I realized it would be advantageous to do testing against authorities that had free SSL certificates, since doing tests against these wouldn’t cost me any money. I passed on Let’s Encrypt because I figured it had already been thoroughly audited, the second site I saw was a 30 day free trial from Positive SSL (a company owned by Comodo). This seemed like as good a target as any, so I went through their online process for issuing a free 30-day trial certificate for my website thehackerblog.com.

The following is a screenshot of the PositiveSSL website, advertising the free 30 day trial: 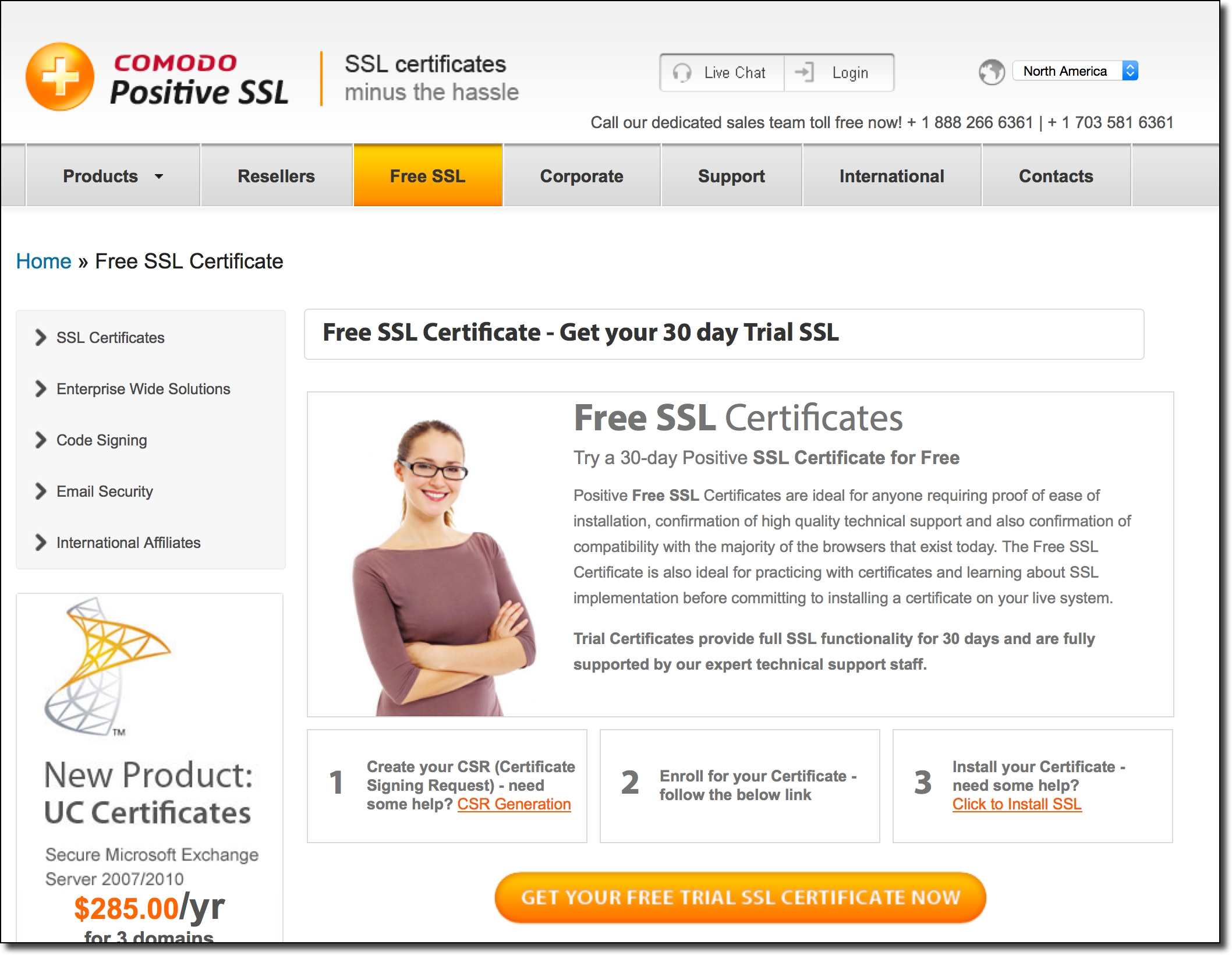 The process starts by requesting a certificate signing request (CSR) from the interested user. This can easily be done by using OpenSSL via the command line:

Once you have your CSR, you then have to paste it into the web application: 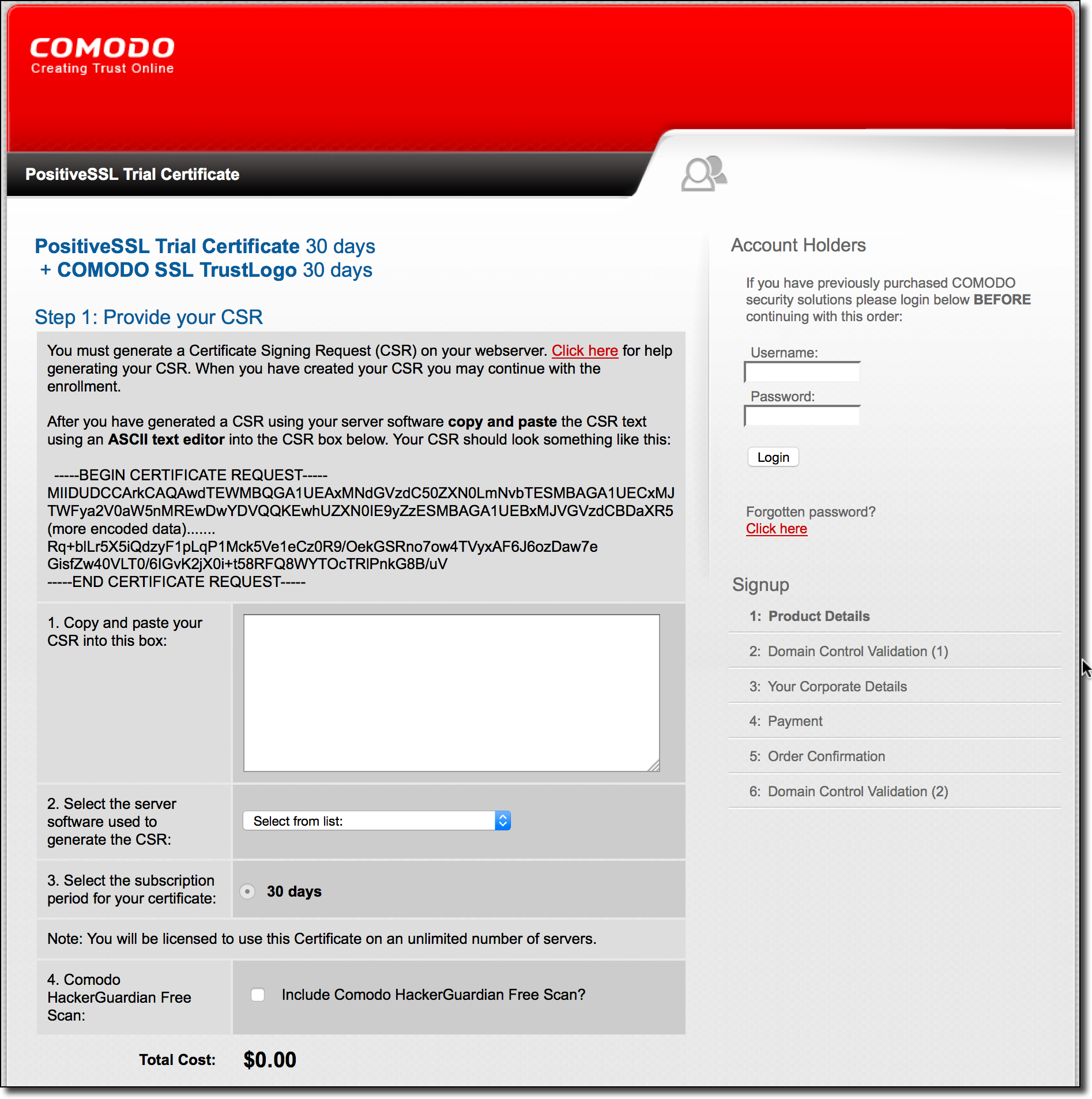 Upon entering your CSR and selecting the software you used to generate it, you then select the email address for domain validation (from the website’s WHOIS) and arrive on a “Corporate Details” page. This is the vulnerable portion of the application, where you fill out your company/personal information getting to the email validation portion: 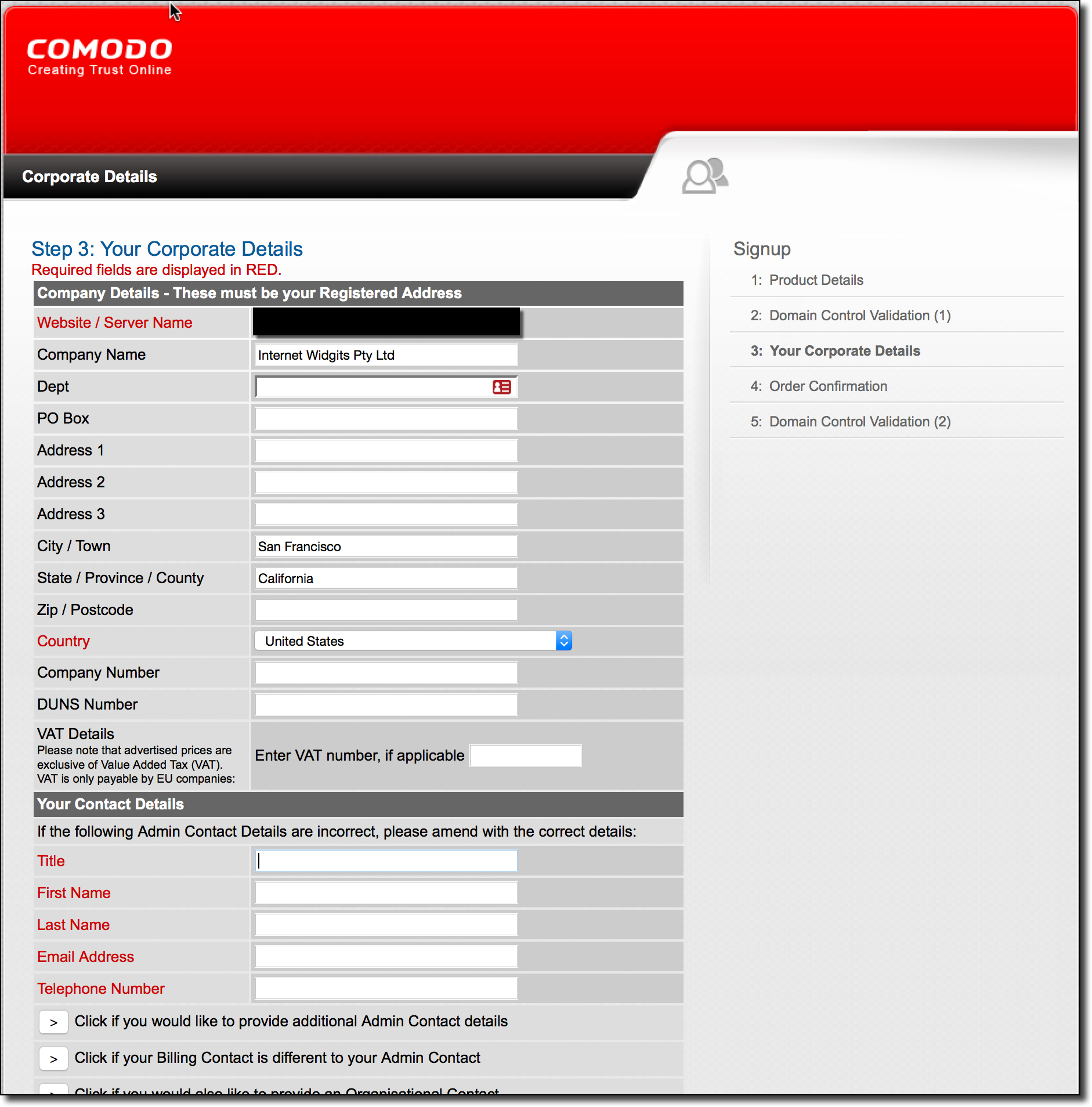 When I first went through this process I mindlessly filled out junk HTML for all of these fields. The service then sent a verification email to the email address on the website’s WHOIS info. Once I received the email, I noticed the HTML was not being properly escaped and the markup I had entered before was being evaluated. This is really bad because the email also contained a verification code which could be used to obtain an SSL/TLS certificate for my website. This means if I had a way to leak a victim’s token, I could obtain a valid certificate for their site, so that I could intercept traffic to that site seamlessly without users knowing I was doing so.

Since almost no email clients support _

Peeking at the above raw email we notice that the HTML is not properly being escaped. Additionally, Comodo makes use of a static email boundary of (AlternativeBoundary) which is dangerous because it allows us to inject arbitrary email sections into the email that Comodo sends for domain validation. We’ll ignore the email boundary issue and focus on the HTML injection issue. As it turns out, the Company Name field we saw previously is not length-limited which allows us to inject arbitrary HTML into the end email. We will take advantage of this by setting our Company Name to the following:

The above HTML will redress the email and start an unclosed <textarea> block which will “swallow” the rest of the email’s HTML with a submit button and form pointing to my website. The following is a screenshot of the email sent to me from Comodo:

As can be seen in the above screenshot the final email has been redressed to state that the user has 24 hours to reject a pending SSL/TLS certificate request. Unknown to the victim however, clicking the button will actually leak the verification code to my own site via <form> submit. Basically, any site owner that receives this email is one click away from allowing an attacker to issue a certificate for their site. This is a basic redress example, since you have arbitrary HTML you could make the entire thing much more convincing. Form submissions are a great way to leak secrets like this because they work in many different mail clients. Even the iPhone’s Mail app supports this functionality: 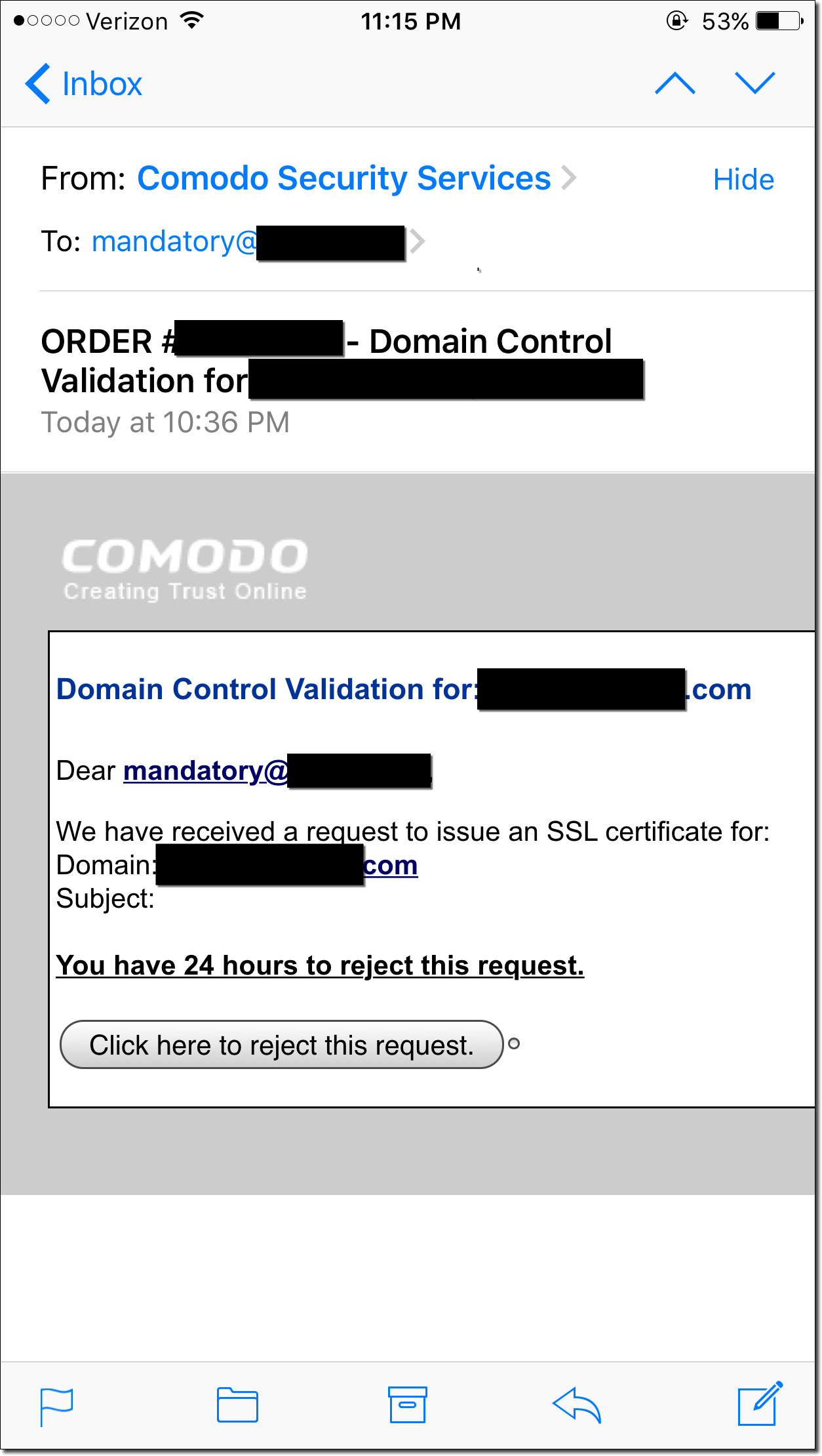 Once I’ve leaked the code from the victim in this way, I can then log into the account I created during the certificate request process and download the SSL/TLS certificate. The following is a screenshot of what this looks like: 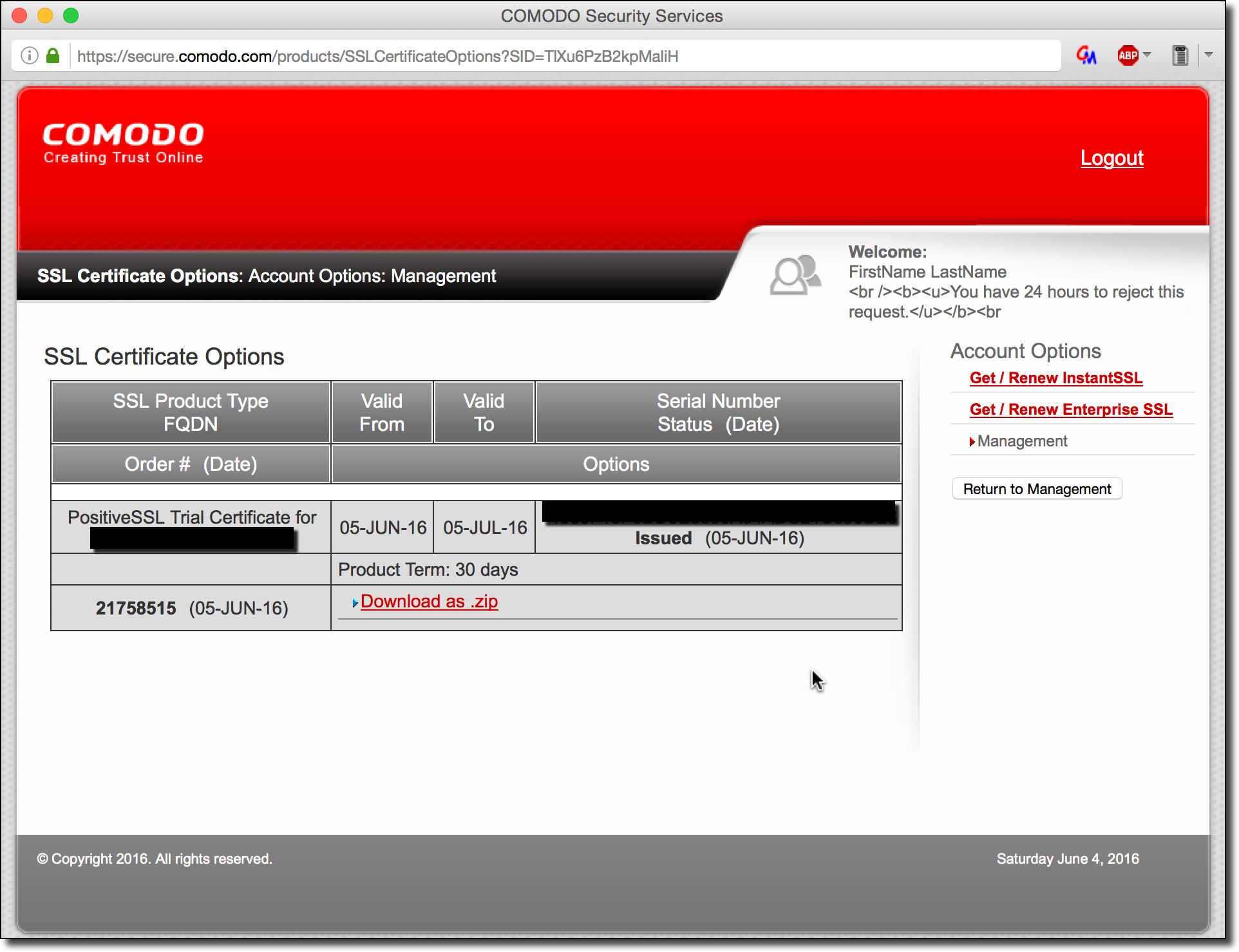 In a real world attack scenario, a malicious actor would forge these emails out to popular websites such as Facebook.com, Google.com, etc in order to snoop on the traffic of their victims. Since the email passes SPF checks and is legitimately from Comodo, a system administrator would have no reason to believe this email is not completely authentic.

One other important thing to note is that resellers of Comodo’s certificates were also affected as well. This risk is amplified because resellers can have a customized HTML header and footer for the verification emails that get sent out. This means that it would be possible for a third party vendor to have a dangling <img> tag in the header combined with a single quote in the footer which would side-channel leak the verification code in the email body (similar to the attack above, but automatic with no user interaction). This style of dangling mark-up injection wasn’t possible in the previously proof-of-concept but is possible for resellers. I was not able to build a proof-of-concept for this however, because I didn’t want to probe further into their reseller system after reporting the initial vulnerability.

Normally, the name of the game when it comes to finding a way to mint arbitrary SSL/TLS certificates is to find the smallest, cheapest, and oldest certificate provider you can. Comodo is the exact opposite of this, they have a 40.6% marketshare and are the largest minter of certificates on the internet. Basically, they are the largest provider of SSL/TLS certificates and yet they still suffer from security issues which would be (hopefully) caught on a regular penetration testing engagement. This paints a grim picture for the certificate authority system. If the top providers can’t secure their systems, how could the smaller providers possibly be expected to do so? It’s a hard game to play since the odds are heavily stacked in the attacker’s favor with tons of certificate authorities all with the power to mint arbitrary certificates. A single CA compromise and the entire system falls apart.

Luckily, we have some defences against this with newer web technologies such as Public Key Pinning which offers protection against attackers using forged certificates. The following is a quote from MSDN about the functionality:

“To ensure the authenticity of a server’s public key used in TLS sessions, this public key is wrapped into a X.509 certificate which is usually signed by a certificate authority (CA). Web clients such as browsers trust a lot of these CAs, which can all create certificates for arbitrary domain names. If an attacker is able to compromise a single CA, they can perform MITM attacks on various TLS connections. HPKP can circumvent this threat for the HTTPS protocol by telling the client which public key belongs to a certain web server.”

This is a fairly powerful mitigation against an attacker with a forged certificate. However, the support is iffy with a lack of support in Internet Explorer, Edge, Safari, and Safari on iOS.

For an alternative system to CA’s, a few ideas have been presented but none have widespread support. One example being Convergence which was presented by Moxie in the talk previously mentioned in this post. However this is only supported by Firefox and I’ve personally never heard of people using it.

Many people like to speak of a certificate authority hack as if it was something only a nation state could accomplish, but just a day’s worth of searching led me to this issue and I don’t doubt that many providers suffer from much more severe vulnerabilities. What happens when your attacker doesn’t care about ethical boundaries and is willing to do much more in-depth testing? After all, this is Comodo, the largest provider. What about the smaller certificate providers? Do they really stand a chance?